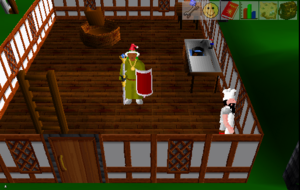 The Cooks' Guild is a guild released 17 March 2001 and is dedicated to the cooking skill. Players need to have a Cooking level of 32 and must be wearing a chef's hat otherwise the Head chef will not allow them to come in.

The ground floor[UK]1st floor[US] is where players enter the guild. Here is where the Head chef goes about his business. A ladder near the entrance door leads up to the second floor. There is a Chocolate bar which spawns here on a table in the north eastern corner. There is also a sink on the eastern wall, which players can use to fill jugs, vials, or buckets.

The ladder on the ground floor[UK]1st floor[US] will bring you up a level, and into a room with 2 ranges. On the northern wall are 5 tables. On the tables, in order from west to east there are cake tin, bowl, pie dish, and cooking apple spawns. The millstones of the flour mill are also on this floor.

In the south western corner is an Emergency escape ladder, mainly intended for those who cannot exit via the main door due to losing their chefs hat.

The 2nd floor[UK]3rd floor[US] of the guild's interior is home to the hopper of the flour mill. On the south western wall there is a table with a spawn of grapes. On the north eastern wall there are three 3 tables. On the tables, in order from west to east are pot, jug, and cooking apple spawns.