Overview of the Combat Training Camp.

The Combat Training Camp is located north of West Ardougne in the Kingdom of Kandarin. It can only be accessed after the completion of the Biohazard quest to help prepare you for the Underground Pass quest which requires 25 ranged. 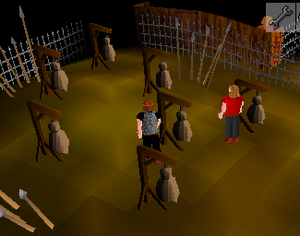 The south-western area of the camp contains many fight dummies. These aren't particularly useful as they can only be used to gain a limited amount of Attack experience before they become useless. 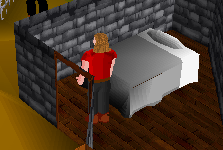 The bed in the northern most building of the Combat Training Camp.

In the southern most building is the Weaponry Shop which sells weapons of all kinds, from arrow heads to battle axes to 2-handed swords.

The building above the shop contains a single bed which is great for getting rid of fatigue acquired from training in the camp. 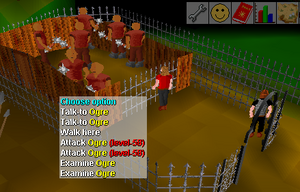 The most useful aspect of the camp is the Ogre cage in the northwestern area. The cage contains 7 level 58 Ogres which makes it a great place to train ranged or magic.