Chaos druids are monsters who worship Zamorak. They are commonly used for Herblaw training because of their common herb drops. Their relatively low maximum damage to the player's hitpoints makes it possible for players to kill them at low combat levels.

While in the Edgeville dungeon, low levels should be aware that these are one of the many monsters that are aggressive. Though they don't hit high nor often, they can be a nuisance while trying to leave the dungeon due to the fact that players must complete three rounds of combat before running away from the fight. They often attack players three to four times before they can exit. 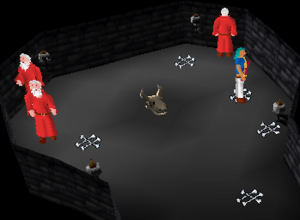 A player killing Chaos Druids in the Taverley Dungeon 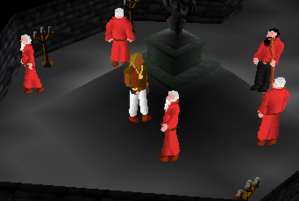 A player killing Chaos Druids in the Yanille Agility Dungeon