The Bank trick is a process of getting multiples of an item that is otherwise restricted to having only one copy and notably when the drop trick does not work on it. For example, the Staff of Armadyl: after the player has defeated all of the guardians in the room and grabbed the staff, attempting to get another staff whilst already having one in inventory will result in the message "I already have one of those". However, if the player has banked the staff and attempts to go for the same process of getting a staff, they will end up having an additional staff. The player can repeat this process as many times as they want. This allows the player to gain as many Staves of Armadyl as they want. 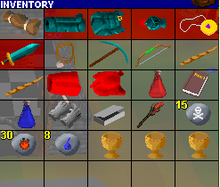 This technique is used with items that players want more of in which the drop trick is ineffective, as re-banking each time can be time consuming.