The Amulet of GhostSpeak is gained by talking to Father Urhney during the quest The Restless Ghost. He can be found on the southern side Lumbridge Swamp living in a house next to the mine. Its purpose is to allow the player to talk to the ghost during the quest. After the quest is complete, the amulet becomes useless and only functions as a cosmetic item.

You may obtain more than one amulet at a time by dropping the amulet, talking to Urhney, and then picking up the one you dropped. 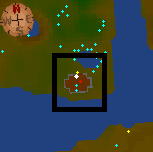 Father Urhney's location in the southeastern part of Lumbridge Swamp

Despite the red thunderbolt that appears to decorate the Amulet of Ghostspeak on its inventory icon, this amulet's appearance when worn is that of a plain silver or white necklace and when equipped is identical in visual appearance to the Amulet of Accuracy.