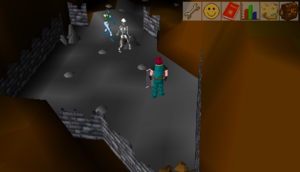 Ah Za Roon was an ancient temple in Karamja. It was built by the great priest Zadimus and destroyed by sorceress Rashiliyia. Its ruins are visited during Shilo Village quest by digging Bumpy Dirt northeast of the village near the Karamja waterfalls and Stepping stones. Trufitus in Tai Bwo Wannai must have told about the ruins before digging becomes possible.

After the quest the entrance will cave in and the player will be unable to re-enter the ruins. 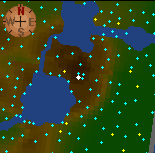 Entrance to the dungeon northeast of Shilo Village.

The ruins are divided into two parts separated by a Pile of rubble that requires level 32 Agility to climb. There is only a total of about dozen Undeads wandering in the dungeon so the place isn't any good for Melee training.

The quest items in the dungeon are:

The cave can be left by Crafting a Smashed table into a Crude Raft. The raft takes the player along the underground river and through the waterfall to outside east of the entrance.

Wet rocks by the waterfall may also be climbed to leave the area.