From RuneScape Classic Wiki
Jump to navigation Jump to search
The RuneScape Wiki also has an article on: rsw:2002 Halloween event 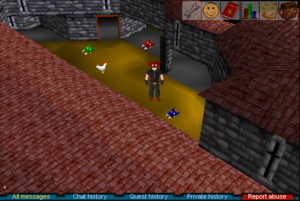 During the 2002 Halloween event, Halloween masks were dropped all around RuneScape, and came in 3 different colours. Halloween masks have since become rare and expensive, and are bought by players to showcase their wealth.

Unlike the first year of the game, where many Party Hats and pumpkins had been lost by preferring more valuables over the bank space, this was not the case for halloween masks. Even though bank space was still an issue specially for Free-to-play players, many did not care as they knew the price had to start increasing eventually, similarly to party hats and pumpkins. As a result, only few players gave or sold them away. This Halloween event was the last one to see tradeable discontinued items before many years.