From RuneScape Classic Wiki
Jump to navigation Jump to search
The RuneScape Wiki also has an article on: rsw:2001 Halloween event 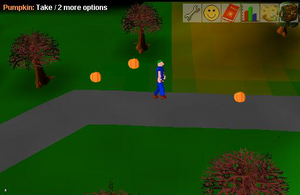 The 2001 Halloween event was RuneScape Classic's first holiday event, during which Pumpkins were dropped to celebrate the occasion. Throughout the day of 31 October 2001, Pumpkins were scattered across random towns throughout Runescape during different times of the day. Players could simply pick them up if they came across the drop. The Pumpkin is remarkable for the fact it's one of the only two tradeable and edible holiday items, a distinction it shares with the Easter egg.

RuneScape's creator Andrew Gower was found online in Falador, dropping pumpkins randomly and even trading with a lucky few people, giving them a Halloween treat in the form of a pumpkin.

Back at the time Pumpkins were worth only a few coins and bank space was very limited (48 spaces), as a result, many decided to either not pick them up or use them as a healing method when fighting monsters or other players. Because of this many pumpkins were lost. Since then pumpkins became a quite rare and valuable edibles.